Leadership and Other Problems 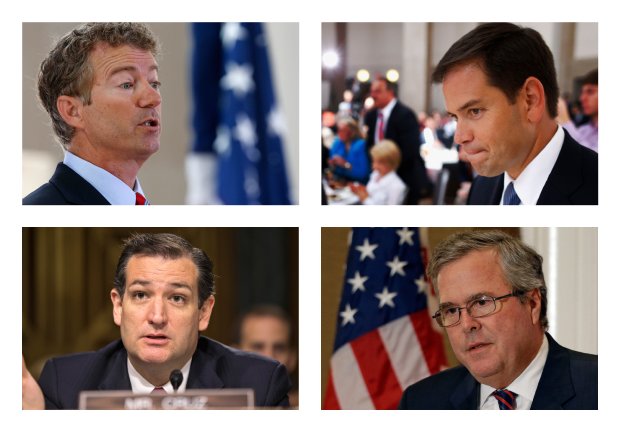 Some strong articles today on leadership and other problems in the GOP - "The Republican Leadership Problem" at Smartypants; "The Destructive Rise of the No-Government Conservatives" by Obama's former speechwriter, Jon Favreau; and "Are Republicans Too Divided to Have a Civil War" by prominent conservative pundit Byron York. Interesting articles, all of them.

Smartypants places Rand Paul and Ted Cruz in the "lunatic caucus" and Marco Rubio and Jeb Bush in the "know better but too afraid to take them on" camp. The first too, per Smartypants, wants to eliminate good government; the latter two are trying to get elected, and know they must steer away from extreme conservative positions.

Jon Favreau makes a similar distinction, using the same grouping: Paul and Cruz represent a brand new phenomenon - the coming together of the libertarian GOP and its new Tea Party wing in what Favreau calls the No-Government GOP wing, versus Rubio and Bush in the traditional small government wing. Here's Favreau:


"The goals of no-government conservatives are not primarily economic. They will propose more tax cuts in times of surplus and times of deficit. They care little when the nonpartisan experts and economists at the Congressional Budget Office say sequestration will cost up to 1.6 million jobs next year, or that immigration reform will boost our GDP, or that Obamacare will reduce the debt over time. No-government conservatives are not compelled by the evidence that temporary benefits such as food stamps and unemployment insurance put money in the pockets of those most likely to spend it at local businesses that will grow and create jobs as a result. Their only jobs agenda, their only growth agenda, their only deficit agenda is eliminating government, no matter how many people it helps or how big a boost it provides the economy."

Byron York is remarkably candid and straightforward in his article. He clearly acknowledges the divisions but then points out that the different factions are not iron-clad; they tend to shift, depending on the issue. For example,  Paul and Cruz were on opposite sides in immigration, but are standing together on going to the wall to defund Obamacare. Hence his title and theme: Republicans are too divided; the varying sides cannot stay together long enough to have a real civil war!

I believe we are seeing the initial signs of a serious fracture within the GOP. I really like Favreau's distinction: the no-government group versus the small government group - and notice, the moderate GOP wing has already been eliminated by the ascendant Tea Party.

The next few months will be critical. In my last post I said there is a 60% chance the GOP will lose the House in November, 2014. Here are my predictions on the three major "happenings" coming up:

If all three happen, GOP mid-term loss odds go up to 75%. If just two of the three happen, I think the odds drop to 60% (predicted above).

How would you rate the chances of one, two, or three of the three trigger events happening?

And one more thing: do you think this split within the GOP would have happened if Obama had followed his liberal critics constant advice and declared war on the GOP? As Smartypants calls it: "conciliatory rhetoric as a ruthless strategy." Our President, remember, plays the "long game', and he has played it brilliantly.