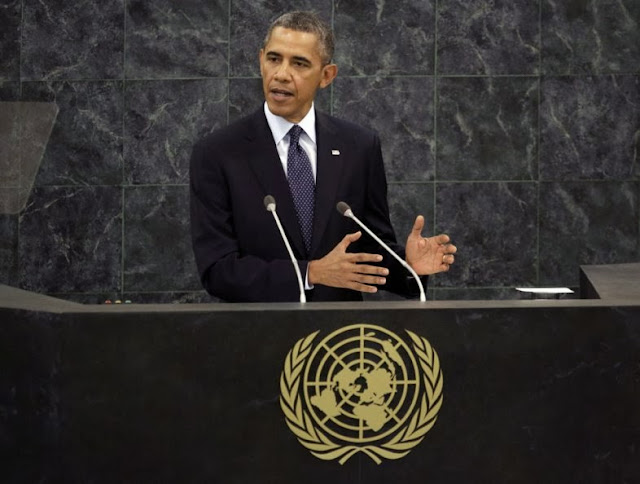 President Obama addressed the United Nations General Assembly this morning. The full transcript of his remarks are here. It was a great speech. It was the speech of an integral leader.

Why do I say that? What elements does the speech need to have to be called integral? Let me list a few:
Obama's speech today was integral in every sense of the word. This is Obama as peacemaker - the man who can eat humble pie if it helps give grounding to a new diplomatic initiative (Syria), but the man who is fully ready to use force if important international norms and values are threatened. Peace through shared accountability. This is where we are now with Russia in regards to Syria, and today Obama invited the rest of the world, and specifically the members of the Security Council to help ensure Syria remains accountable.

This is Obama as hopeful peacemaker offering an olive branch to Iran - accepting their implied initiative to begin real negotiations and saying, "Let's give diplomacy a chance."

This is our integral leader fully honoring both the Israelis and the Palestinians, and their legitimate security concerns, but also their deeper aspirational feelings about having a secure home, and being able to live and grow their respective countries in peace. And he called on every nation member present to join in this broader conversation to provide each side with support, honoring, and commitment to find a peaceful way forward.

This is our integral President. We are blessed indeed.