The Elements of GDP 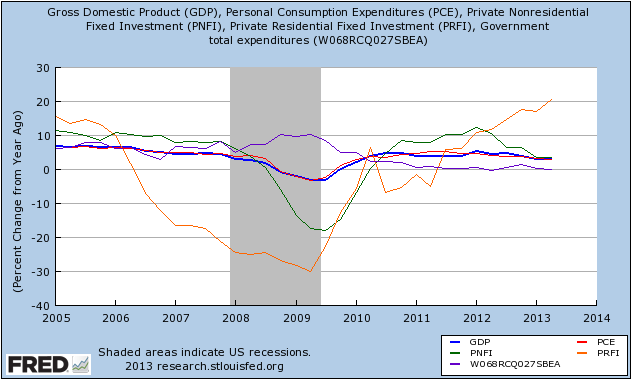 The above chart shows GDP growth rates (solid blue) and its components(data from the Federal Reserve of St. Louis):

Since Imports invariably exceed Exports, Net Exports (X - M) is regularly a 5 - 7% drag on GDP. They are not shown above, because FRED did not have a comparable, year-over-year, quarterly comparison(not inflation adjusted).

Just a few things to notice from this chart:
A few other observations:

And finally, the most obvious thing from this chart for me is that the Government is not spending nearly enough to move us into a strong growth position. Pete Peterson, among others, have made us terrified of deficits and government debt. They are wrong. Almost completely. But they have won the day on the political playing field, because even the President and the Democrats have taken a partial austerity stance. More on this to come.

Meanwhile, we're doing OK. Obamacare will kick Government spending up a notch in 2014. I'm hopeful that the US energy transformation via fracking will underpin new business investment. Immigration would be a strong positive, if it passed - but I'm afraid it won't, at least not before the 2014 mid-terms. We need more Government investment, in infrastructure, education, and manufacturing. Again not likely, unless Dems retake the House.

But we're doing OK on a GDP basis, not so well on an income equality basis; but to address this, Dems need to retake the House.
Posted by Unknown at 12:47 PM