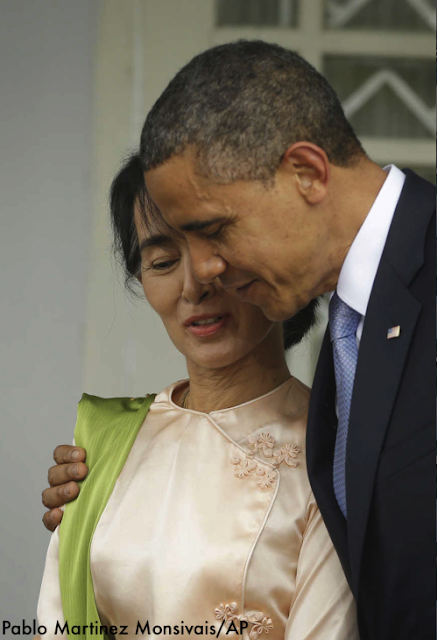 So what does an Integral Leader do exquisitely well that allows him/her to distinguish the surface storm from the deeper current or purpose? He listens. It's hard to describe this deep listening that is the foundation of the integral leader's personal power. You the reader need to reach into your personal experience for a time, a moment when you felt totally seen, totally heard - as if the person listening to you was offering you a safe, even sacred space in which to be heard.

If you can remember a time you were listened to that way, can you also find a moment in your past when you listened to someone else that way? What was present for you? What thoughts or feelings were active? And if your experience was authentic deep listening, then you probably felt an interior quiet, an absence of thought, and a presence of deep caring, even love.

This is what is present in the picture above: the President is listening deeply to Aung San Suu Kyi. And remember that she is an integral leader as well; so she knows deep listening when she experiences it; and she gives it right back. Teachers of this deep listening practice will tell you that "We listen each other into speech." Ego, anxiety, even plans simply disappear. If we can trust, we simply relax, enter the flow, and are inevitably surprised by what we say.

What does this have to do with Deep Currents, Surface Storms, or Leading from Behind, or Healthcare? Let me try to explain.

What happens in deep listening is the leader puts her ego off to the side. We don't try to command the ego to go away; we just quietly ask it to stand a bit over to the side. It's present and available, if needed; but it's not running the show. The ego is the part of ourselves that attaches to things - positions, ideas, possessions, people, emotions, anything. And whatever we are attached to, that we can no longer see clearly. To see the deeper currents, to pick up on what is trying to emerge, you have to let go of your attachment to any particular outcome, to your being right, to "your side winning". In deep listening we let go of attachments and let what wants to arise, arise. If we are not attached, if we have cleared our lenses of perception, then we can see what is really present. This is how the integral leader can consistently see the deep currents, can decipher what is really happening underneath all the strum und drang. And the storms don't bother him; he maintains a quiet center. It's the ego that seeks and is constantly caught in the surface storms and distractions.

The same qualities of non-attachment allows the integral leader to lead happily from behind. Non-attachment does not mean indifference, apathy, or separation. You will care deeply about your commitment, but you don't grasp it. You have a preference for an outcome, but you will be content with what arises.

So what does the integral leader do when he wants to see a universal healthcare plan come into the world, one that will alter one-sixth of the world's largest economy?
The team so organized and listened into existence becomes a high performing team - extraordinary in its creativity, its resilience, and its perseverance. Teams like this ultimately resurrect several times during a dream-building project. After a while, team members are certain that they can literally walk on water. And the dream emerges. Anyone of you who has worked on a high performing team, one which could walk through walls and on the water, and could come back to life more than once, after having been declared dead - you know what I'm talking about. And in my experience an integral leader is the one most likely to be able to nurture and help manifest such a team.

As to the long term healthcare cost curve bending down, the fact that this is happening, is due to numerous provisions in the ACA, and it follows a similar dynamic. The way to affect and change a complex system is through adjustments to its identity, relationships, and information distribution. The ACA directly and indirectly gave the healthcare industry a new mission: move away from fee for service; pay for quality not quantity; find a way to reward providers helping patients stay healthy and not use the system; convert the entire system to Electronic Medical Records. In other words, initiate a healthcare delivery productivity revolution, so costs can come down long term. The bill has suggestions on how to do this, but it does not mandate a particular path. The idea was to provide a testing mechanism and a way to effectively scale up from good tests, and call on the creativity of the industry to find ways to organize themselves so as to meet the guiding principles and deliver long term cost restraint.

Nobody knows in advance how to do this thing. So set up goals, key objectives, and some new incentives, and let the system take off and begin to self organize in a creative movement towards the stated "attractors" or objectives. Don't overmanage. Set the vision, and some specific processes, metrics and incentives, and step back. And it's working.

This is how an integral leader leads. She can do this because ego is not the driver. It's the vision. And the people the vision is intended to serve. And the emerging high-powered team that is doing the initial work.

All of this starts with a leader who can listen others into speech.