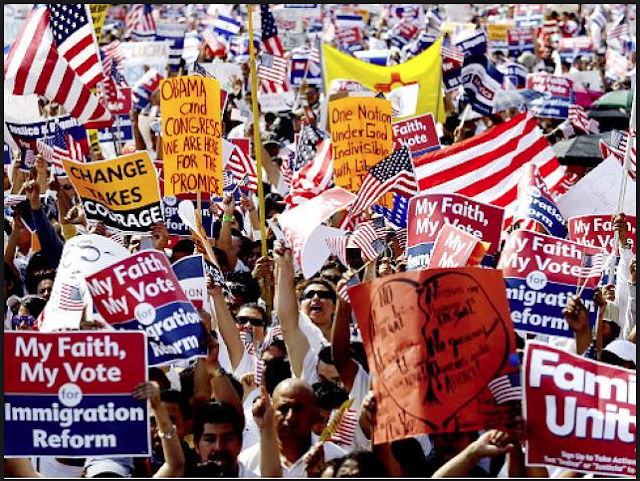 I am starting to get excited. When the Ryan-Murray budget compromise went through the House with a commanding bipartisan majority, I knew this could be an opening for Immigration reform, but most of me thought this might be just a one time thing, and that the Hard Right would quickly  reclaim control of the House agenda. Now I'm not so sure. Smartypants kind of woke me up to the new possibilities, starting with this clip from Speaker Boehner's small but powerful rant:

Smartypants thinks something has shifted. She came back to it today. She thinks the GOP generally thinks it's in the Party's interest to pass Immigration reform, and because of the "shift", Speaker Boehner will allow a vote, despite Tea Party objections.

I think (and very much hope) she's right.

But what caused the shift? Why did Boehner stick with the Tea Party during the shutdown and not now? Shifts happen beneath the surface. What current caused the change? Here's my guess:
GOP leadership has taken a shutdown off the table due to how effectively Obama has played his hand. Without a shutdown threat, there is nothing in the Hard Right's agenda that they have any real chance of advancing. So we either do things on a bipartisan basis, or we do nothing. I predict that Boehner will not go back to ceremonial votes, where all the GOP vote for something (like repealing Obamacare) and none of the Democrats do. He might on minor, symbolic stuff. But on big, visible, important stuff, I predict he won't.

So if he feels it's important to the GOP that they allow a vote on Immigration, he will. And it will pass on a bipartisan basis.

And the positive ripple effects through this country will be HUGE!